This month at Oxford we have been focusing heavily on Parkinson’s Disease. We’ve introduced multiple new programs specifically for individuals diagnosed with Parkinson’s and are thrilled to have several new instructors on the team who are helping to make these programs a reality.

But why this focus on Parkinson’s? For starters, the Parkinson’s Foundation estimates that about 1 million Americans and 10 million people worldwide live with this crippling disease. Approximately 600,000 people in the United State are diagnosed each year. To put that into context, there are more Americans currently living with Parkinson’s than the combined number of people diagnosed with multiple sclerosis, muscular dystrophy and Lou Gehrig’s disease. Allegheny County in particular has one of the highest numbers of cases per county in the nation, without approximately 6,000 cases and the number steadily climbing.

One of the biggest pieces of advice you will find through any Parkinson’s resource is to stay active. Regular physical activity is crucial when coping with Parkinson’s, which is why we decided to partner with some incredible individuals to bring Parkinson’s-focused fitness programs to Oxford.

One of the programs that kicked off this month was Rock Steady Boxing. Rock Steady Boxing is a national program that was founded in 2006 by Scott Newman. Scott was diagnosed with early-onset Parkinson’s disease at the age of 40. He began an intense boxing regimen and found that it drastically improved his physical health, agility and daily functioning. He then decided to start a program to allow other patients to engage in similar kinds of training with caring professionals and a phenomenal support network.

Which brings us to today. At the beginning of October, Oxford began to offer Rock Steady classes led by Rock Steady certified trainers Maria Berexa and Kathy Gonano. We sat down with Maria to learn more about how she got started with this awesome program.

Q: Can you tell me a little bit about your background?

Maria: I am a wife and mother of 3 wonderful kids (ages 24, 20 and 17). I was able to stay home with them and I am so thankful that I could have that time with them, but as they grew and needed me less I knew I needed something for myself, something where I could give back to the community and feel like I was making a difference in some way.  I went and got certified by Rock Steady Boxing in 2014 and then received a certification from Delay the Disease, another wonderful program that helps those that suffer from Parkinson’s.  Last March I decided to further my knowledge and became an ACE-certified personal trainer.

Q: How did you get started working in fitness and boxing training? Where does your passion for fitness come from?

M: I have always been passionate about exercise.  I have run several half marathons, done cross-fit, yoga, spinning, Pilates; I’ve tried it all and there was nothing I didn’t like. I started boxing about 12 years ago and trained with Joe Divosevic (a pro fighter). I was hooked the first time I boxed!  I immediately went and bought gloves, wraps and even special boxing shoes. I knew I would never actually fight in the ring, but I wanted to learn everything I could about boxing.

Q: How did you get started working specifically with Parkinson’s patients?

M: I started working at another fitness gym and they brought Rock Steady in.  I was in charge of the program there.  Immediately I loved what this program did for people suffering with this disease.  They started off being scared and unsure, but I could see they were dedicated to finding anything that would help them feel better.  Their fear turned into confidence and happiness! They went from walking slowly to running and jumping.  It was amazing to see!

Q: Can you walk me through some of the thought process behind Rock Steady and using boxing to help treat Parkinson’s?

M: That is the number one question most people have: why boxing?  There were studies done by ESPN that ranked boxing as the #1 hardest sport to train for.  Not only is it a High Intensity Workout (Parkinson’s responds well to High Intensity Training), it helps with balance and cognitive function.  You have to have balance with your stance alone, and balance is something that people with Parkinson’s struggle with.  The cognitive function comes from knowing the punches and numbers and remembering them while doing different combinations.

What’s nice about boxing, I believe, is that it gives you confidence.  And that’s something that gets lost when some of my fighters are diagnosed with this disease.  I see this confidence return with every class they attend! Exercise has been proven to help with depression too, which is common with this disease.

Q: What does a typical Rock Steady class look like?

M: We always start our classes with a warm up and then a series of stretches.  Then we get our gloves on and beat up the bags! Sometimes I hold Mitts for them, which they love! We also like to do station work; each station is about a minute long and we do things like obstacle courses, hand weights, balance training and some sort of core exercise.  A lot of times we play games too! They love the bean bag game.

We also have chat sessions before or after class. It’s good for them to talk about things they might be suffering from and ask others if they are going through the same things.  The social aspect of the class is extremely beneficial.  They form a bond.

Q: What would you say to someone recently diagnosed with Parkinson’s?

M: I would tell them to take each day one day at a time! And never give up; it’s easy to stay home and do nothing! I always say the hardest part of the workout is getting there.  I would tell them that I will be with them and together we will “Punch Out Parkinson’s!”

Q: What’s been the most rewarding part of your work through Rock Steady?

M: Getting to know my fighters! They are wonderful and I have built lasting relationships.  Sometimes they may not want to come to class because they aren’t feeling well, but they almost always push through and come! I love seeing their progress with some of the activities we do. They are the hardest most dedicated workers and I am truly blessed to be able to train them.

Trainers Maria and Kathy with the Rocky Steady crew. 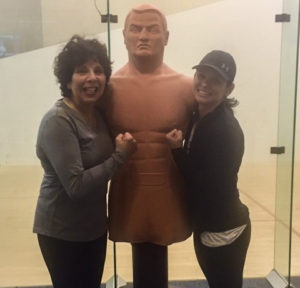 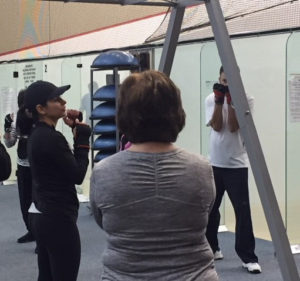 Maria and some of her fighters on the first day of Rock Steady. 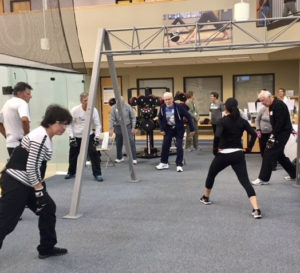 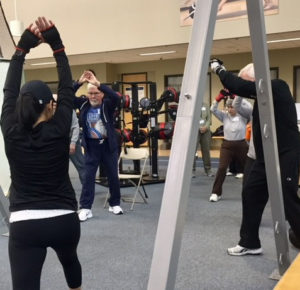 Rock Steady classes with Maria and Kathy run on Tuesdays and Thursdays from 11:15 am-12:30 pm. You can contact the fitness desk for more information.

Oxford will also be offering yoga classes for Parkinson’s patients. Yoga for Parkinson’s is led by Walt Gasiorowski. Walt is a registered yoga instructor and his classes work to increase balance, focus, controlled movements, and cognitive function. Walt was trained as a part of a new program developed by Dr. Paul Nussbaum, Ph.D, ABPP, Clinical Neuropsychologist from the Brain Health Center in January of 2017.

“I realized from Dr. Nussbaum’s input that more than just Yoga would be beneficial,” Walt explained. “I drew on my experience from the arts of Aikido and Tai Chi to include additional movement patterns that are not necessarily a part of Yoga. Particularly, complex full body movement patterns requiring a great deal of coordination and mental focus. Also movements incorporating bilateral and cross lateral stimulation patterns. A variety of vocalization exercises as well as rhythmic exercises are conducted as part of this program.”

Walt’s program is another amazing program that we are thrilled to begin offering this month. Like Maria, Walt is passionate about his work with individuals diagnosed with Parkinson’s. We asked about the most rewarding part of his work, which Walt summed up beautifully:

“The most rewarding part of my work has been two-fold. First, seeing that these people show up every week for class and work very hard for their own benefit. These people are actually in better shape than a lot of people that attend Yoga class and they are willing to try new and challenging activities. They actually want new and challenging activities, knowing that this is what they benefit most from. Second, I have seen significant improvement in these individuals with regard to their coordination, range of motion, and balance. They have also told me that their aches have reduced, mood has improved, and anxiety is less.”

To learn more about Walt’s Yoga for Parkinson’s program, contact the fitness desk.